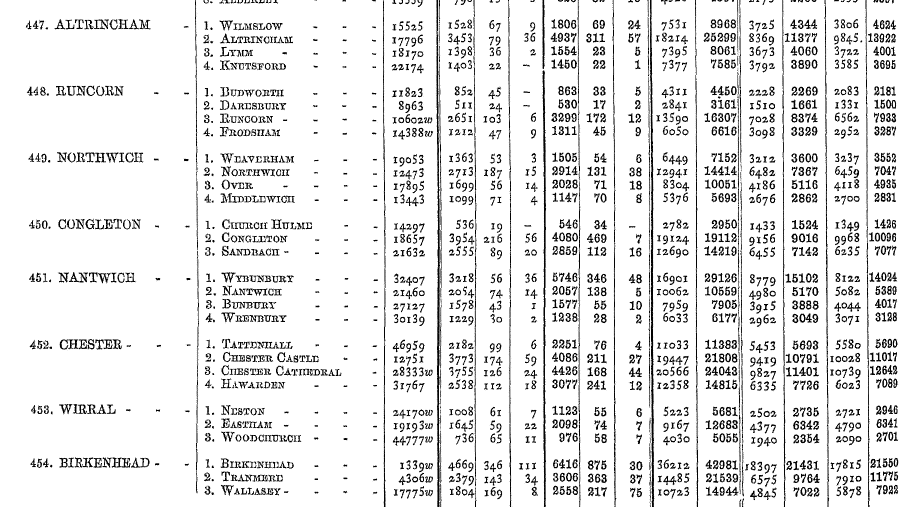 Firstly you’ll need to know how the GRO indexes were organised, once you know this you can apply a few techniques to figure out the record that is most likely to be the correct one.

You might know from census’s or from other ancestors where you should be looking so for example take the Registration District of “Cheshire” in England, this is divided in to further Sub-districts including “Birkenhead”. This is as far as the GRO will detail which is where this technique comes in handy. In the Birkenhead Sub-district there are 3 Civil Parishes, so in this example I have three “John Smith’s” born in the “Birkenhead” registration district. All in Q4 (Oct-Nov-Dec) 1873. (Screenshots Below from Histpop.org and FamilySearch.org)

While these three records look identical if you wanted to be sure on which one is your ancestor, you would expect to have to buy all three certificates to rule two out. But with a few simple steps you can actually find out which of the 3 districts these records relate to. The information on the three “John Smith’s” we have available to us is:

Step 1 – Extract all births for that quarter

The first step is to extract all of the births for that quarter. You can do this easily by going to FreeBMD and searching for just the registration district and the quarter. Then copy and paste the results in to a spreadsheet. You should then have a quick look through to get rid of any obvious errors such as duplicates or discrepancies. You can use the Page Map-District Index to get the page range of the particular district any outside of this range can be deleted, sort by page number and you should end up with something similar to the following screenshot.

In the same way as in step 1, find the expected page range using the Page Map-District Index and open up a new sheet in your spreadsheet. Then input the page numbers between the ranges for example, Birkenhead’s expected page range for Q4 1873 is “425-511” This should look something like the following screenshot:

Step 3: Go back to the spreadsheet, and open up a new sheet in the same workbook. In the first column fill in the series of cells with the page numbers from 425-511 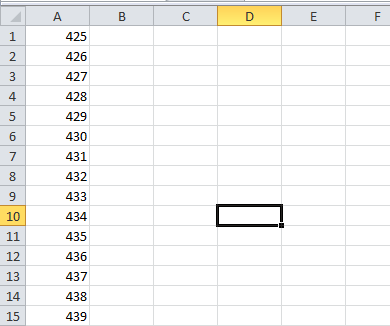 In Column B in your second sheet type in the function bar (The bar with the “fx” function symbol above the sheet) the following formula: =COUNTIF(Sheet1!E:E,A1) and pull it down to apply it to all of the rows with values. In this formula each part can be changed to suit your needs:

This should give you something similar to the following screenshot although you will probably see lots of numbers over 10, which need to be looked in to. You can then colour code based on the anomalies, these anomalies will be the last page of each district: 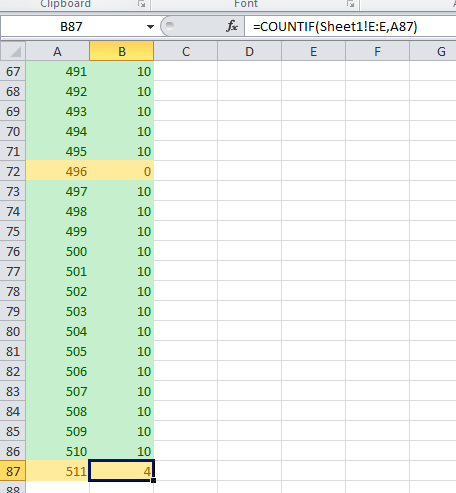 Step 5 – Look for breaks or differences in the Data


Looking for breaks or difference in the data will hopefully show you where the districts split and what page numbers relate to which Civil Parishes. Pages for this year should have up to 10 entries per page. However the data is almost never perfect. The most accurately written/transcribed districts will have data that will have all 10’s a few 9’s and some 0’s as page breaks. The Birkenhead district is not a particularly friendly one. It has loads of 10’s and 11’s which shouldn’t really be possible. You can go through these and check for duplicates missed, for example in page 440 I have “11” entries when really there should be 10. You can see below that there is a “Nelli Hardcastle” and a “Nellie HARDCASTLE”. This is obviously the same person so we can remove this. It’s also worth going through any with more than 10 entries individually using the GRO’s new search function and searching each name individually to make sure the page number is correct I found around 25 discrepancies this way in Birkenhead’s data. 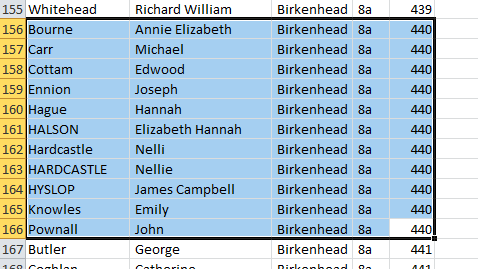 Once you’ve sorted out all of the anomalous numbers you can figure out which parishes relate to which page numbers. You can download my spreadsheet here if it is needed as an example. In the Birkenhead spreadsheet of the eighty seven page numbers there are eighty two “10’s”, two “9’s”, two “4’s” and a “0”. We know that in this year each page would have had a max of 10 entries per page so as we know there are 3 parishes within the Birkenhead district we can deduce which ones are which. As a new page would be started after each parish we know that a 4 must mean that the page was only half filled in, indicating the end of a parish. From this we can deduce that the following page numbers relate to the following parishes.

Going back to our John Smith’s we can now tell which one is from which parish. In this particular example there were only three parishes and three John Smiths. some districts have many more smaller parishes which will narrow down your search massively. We can also work out from the position in each district the page number is from which month of the quarter each John is likely to have been registered. We now know from the above data that our John Smith’s parishes are as follows:

Now if you were searching and you knew that your John Smith’s family all lived in Tranmere then you know which one to buy first! That’s how you can figure out which GRO Index is the correct one!